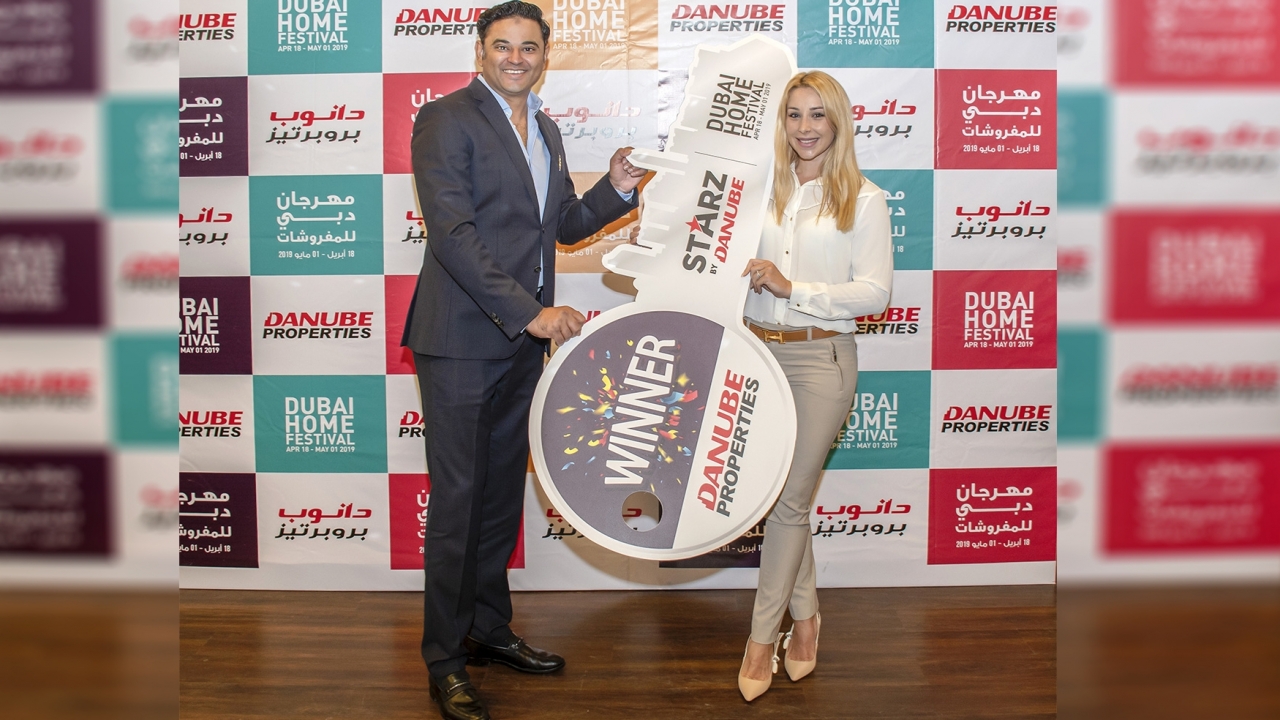 Mr Atif Rahman, Director and Partner of Danube Properties, handing over the key to a studio apartment, won by South African national Bianca O’Donoghue, a resident of Dubai. She was one of the 300,000 shoppers who spent more than Dh500 in shopping outlets participating at the Dubai Home Festival that concluded on May 1, 2019.

Dubai: A South African expat in Dubai has won a fully-furnished studio apartment at the Starz project recently completed by Danube Properties.

Bianca O’Donoghue, 31, won the studio as part of the two-week Dubai Home Festival, which recently concluded.

Her name was picked from amongst 300,000 raffle coupons of the Dubai Home Festival Mega Raffle Draw by officials of the Department of Tourism and Commerce Marketing (DTCM) and Dubai Festivals and Retail Establishment (DFRE). They were flanked by Atif Rahman, director and partner of Danube Properties.

“Oh my God! I first thought it was a trick — too good to believe,” O’Donoghue said when she was informed of the win by a DFRE official.

“Then I remembered about the raffle coupon that I was offered by the shop assistant when I purchased home furnishings at the Home Centre. I had lots of coupons, as I purchased a lot that day. So, that reminded me that this call might be real, and I might have won the prize!” O’Donoghue said.

O’Donoghue, who is a housewife, has never bought property in Dubai as her husband already owns a few in Dubai.

“However, this is going to be mine and I will bring someone special from my family to stay in it. I will not rent it, neither will I sell it. I am so happy,” O’Donoghue said.

The raffle was part of the Dubai Home Festival that took place between April 18 and May 1. Starz is located at Al Furjan, next to Discovery Gardens.

Danube Properties, Rakbank and Mastercard partnered with Dubai Home Festival to offer a fully-furnished studio apartment in Starz by Danube Properties as the top prize for shoppers spending at least Dh500 at participating home stores across 150 outlets during the festival.

Danube Properties recently completed the Dh300 million Starz project that hosts 454 apartments. It will soon start handing over the apartments to homeowners.

Ahmad Al Khaja, CEO of DFRE, commented: “We’re incredibly proud to have unveiled the inaugural Dubai Home Festival this year, as we further enhance Dubai’s position as a leading shopping destination. Together with our strategic retail partners, we have shone a spotlight on the flourishing homeware sector while giving customers the opportunity to enjoy unbeatable sales, promotions and events throughout Dubai.”

Rahman said: “We are very proud to work alongside [DFRE] on the inaugural Dubai Home Festival and delighted for being able to offer consumers a chance to win their dream apartment, which is a once-in-a-lifetime prize.”